The childhood thrill of make believe looms large for Dublin-based artist P.J. Lynch, 2X winner of England’s Kate Greenaway Medal for Illustration. He may not come out and say this. But you can’t not feel it in his children’s book illustrations and murals, YouTube videos and lectures about art and painting in Ireland and the U.S.

He puts pretending first, which makes his formidable technical skills as a draftsman and painter accessible to all.

Lynch created two remarkable murals on the theme of Gulliver’s Travels for the Johnston Central Library — in Cavan County, Ireland (where Johnathan Swift wrote most of his classic satire.)

In the video Lynch shows us how he acted out the character roles for one of the large panel paintings.

Illustrators are actors, as Howard Pyle suggested to his students more than 100 years ago.

In the above BBC film short Lynch talks about illustrating the old Norwegian folk tale East of the Sun and West of the Moon and how he asked his mom, girlfriend, neighbor “and anyone who was handy” to pose for him as characters in Hans Christian Andersen’s The Snow Queen.

In the videos above and below an older Lynch walks us through the stages of creating illustrations for American Frank Stockton’s The Bee-man of Orn.

He shows us how he uses the computer to re-arrange his drawings and compose his scenes to best effect.

Elements from his piles of sketches can be “moved about like paper cut-outs,” he says.

“The great thing is they can be enlarged or reduced and you can even change the shape of them. You can even flip them over, like this…”

“Then all I have to do is paint the pictures,” Lynch says with a hint of drollness.

Some of these pictures will take up to a month to complete, he says.  He’ll make sketch after sketch “before the image ever starts to take shape.”

His watercolor demo speaks for itself. At the end he adds touches of gouache for highlights. You’ll enjoy peeking into his blog, where you’ll find more examples of his spellbinding art.

Check out illustrator and teacher Will Terry’s guest post on  preparing your picture book dummy to send to publishers.  The post is part of the terrific on-going PBDummy Challenge series by illustrators on the #KidLitArt blog.

Will offers  some great video courses on illustration and other art-making at his Folio Academy website. My favorites are How to Illustrate a Children’s Book and his two Photoshop video courses. You can read more about them here.

Are you interested in writing children’s books as well as making pictures for them? You can download two free examination copies of the Children’s Writer newsletter at the newsletter’s website here.

The newsletter is a publication of the Institute of Children’s Literature. Writer Mary Furlong has profiled Make Your Splashes – Make Your Marks! (On Your Mark, Get Set…Illustrate!) in this month’s edition of the Children’s Writer  (June 2012).

Discover an instant way to righteously better drawing in these free videos.

Author-illustrator Mark Mitchell teaches an online course on children’s book illustration that you can read more about here. 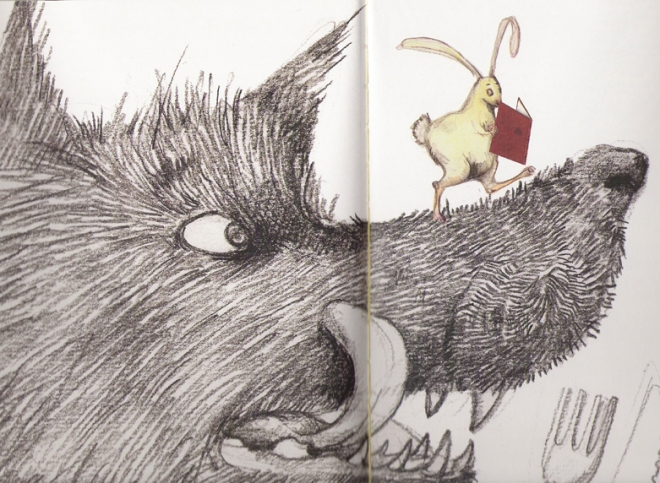 Reading All About Wolves

She read her wonderful picture book Monkey and Me to a crowd of delighted, bouncing younger children in the backyard of the home of Simon and Schuster sales rep Gillian Redfearn.

The children were bouncing because they were imitating kangaroos, which is what the child in the story and her toy monkey sidekick are also doing.  (They imitate the body motions of each group of animals they’re about to see at the zoo, and so the reader gets a chance to guess what the animals will be before he turns the page.

Monkey and Me is so kinesthetic and so cute and you will recognize every three or four year old child you know in the exuberant little girl character who pretends she is every animal.

The next day Gravett and Gale were scheduled to appear at the National Council of Teachers of English (NCTE) conference in San Antonio.

Members of the Austin chapter of the Society of Children’s Book Writers and Illustrators (SCBWI) had also been invited to the backyard party. A few of them would also be doing “author duty” at the NCTE conference (Jennifer Zeigler, whose recent work How Not To Be Popular was just named to the Texas Lone Star Reading List by the Texas Library Association, P.J. Hoover and Brian Anderson.)

This was Gravett’s first trip to the United States — and she said she was dealing with a touch of culture shock. She had found it difficult to understand some of the American English that was spoken to her in Miami. Texas was a little easier, she said, but not much.  She had done readings at Austin area schools during the day Friday, and when she wasn’t doing readings at the evening party, she was signing books for children who just kept quietly approaching her throughout the evening craddling their books. She treated all of them as friends.

Her books are audacious, surprising, hilarious — ballets of expression. One reviewer called them ‘anthems to drawing.” They are that, but they include bits and pieces of computer art collage/ Photoshop tinkering — just enough to keep things feeling modern and a tad homemade at the same time.

Gravett’s works keep snapping up prizes and recognitions in the UK — the Nestle Children’s Book Prize short list for Little Mouse’s Big Book of Fears, and the Neslte Children’s Prize Bronze Award for Wolves. If she lived in the United States, she’d be in the running for Caldecott medals and honors, her fans say. She received her first Kate Greenaway Medal for her first book Wolves, which she completed as a school project. The second Kate Greenaway Medal was for Little Mouse’s Big Book of Fears in 2008.

The Kate Greenaway Medal is England’s equivalent of the Caldecott Medal, since it is awarded by librarians to the children’s book with the most distinguished illustrations each year.

Wolves also won the Macmillan Prize for Illustration, which is awarded by British publisher Pan Macmillan to books for children up to five years old. Gravett has won it twice — for Wolves in 2005 and Little Mouse’s Big Book of Fears in 2008.

Wolves launched her. It’s a book about a little rabbit who checks out a book about wolves at his neighborhood library and begins to read about them with great interest….and I will not tell you what happens.. .

It began in her last year at Brighton University. She was hanging out a lot in the  art school’s Bookbinding department. “I loved it down there. So few people ever came there. But I’d made a little book of 6 or 7 pages. It was like a filligree of paper made to resemble a forest. Each page was flat, with no words, and a wood cutter was cutting it down. When you looked at individual pages, the forest took the form of a wolf,” she said. 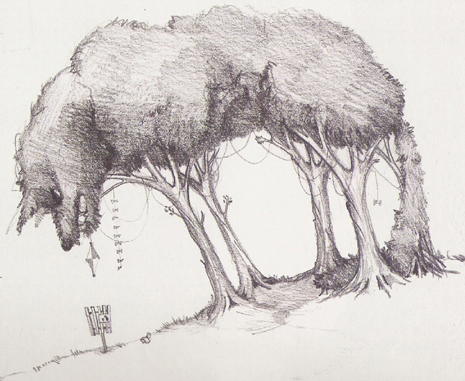 “I sketched that forest for different projects and I drew a little rabbit in my sketchbook and I thought could this be combined for a fairy story?

“So I did a little thumbnail and a little dummy book, very quick. And that’s how I made it, as a dummy,  with book binding with red cloth.

“I originally thought the rabbit was going to escape somehow. But I got the to the page where it shows the [chewed up book cover] and just said ‘rabbits.’ I couldn’t figure out how to rescue him so I just left it. It was funny.

“Then I panicked and wrote the happy ending. It was funny, too. So I left it in, also.”

Gravett has a sensational command of the picture book form and its possibilities.

Could it be from all of those years of reading to her little daughter (now age 9)  when nothing else seemed to work to keep her (the daughter– well maybe both of them) content and calm?

“I think the more you steep yourself in picture books the better off you are,” she said.

Reviewers repeatedly comment on Gravett’s “skillfull drawings.” Done in simple Faber-Castell Pitt oil-based pencil, they’re typically of cartoonish animal characters in action, against backdrops of minimal or no detail, which gives her pages a choreographed quality.

Even the stuffed toy animals feel anatomically right and that they’re moving correctly, somehow. I asked her if she researched and sketched a lot of animals. “Not particularly, although I have animals, you know.

“But I imagine myself as the animal when I’m drawing. I think about, ‘what would my legs be doing’ if I tried to do …this….and ‘how would my arms be?'”

(“My aim is to combine interesting use of words with quality drawing,” she once told an interviewer with the London Telegraph, citing the “looseness of Quentin Blake’s drawings” as one of her inspirations.)

Her draftsmanship probably owes more to her lifelong practice of keeping sketchbooks than academic training, she told How To Be A Children’s Book Illustrator.

“Brighton [University] has a very good reputation as an art college. I chose it because it’s my home town, I’d have family to help out, and since Brighton is one of the larger cities, my partner would be able to find work. But they didn’t teach drawing except once every two weeks we’d have a class in it. A lot of students couldn’t draw very well; They did photography. There was a lot of photography, a lot of conceptual curriculum. ..I’d wanted something more traditional.” 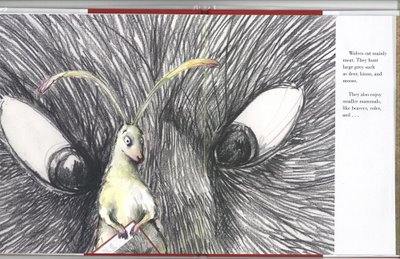 For their class projects (Wolves was one of these), students broke into teams, met regularly and taught each other within their ‘Crit groups.’ These did not always work out because of personalities and temperments in some of the groups. But she did enjoy the bookbinding department, where she spent a lot of time. She also appreciated an eight session-module she was able to get into that focused on  picture book structure.

Gravett thumbnails her books first in her sketchbook. And in these thumbnails the words count as much as the pictures, she said. “I have to do both at the same time or it doesn’t work out so well. So I write a little bit, draw a little bit…

“The finished pictures [in the published books] look very much like my thumbnail sketches,” she said.

Just like her books, her website is a joy that sneaks up on you. It features her drawings of her characters popping in and out of the West Bucks Public Burrowing Library and Emily herself as the librarian behind the counter. If you go in there, though, make sure you don’t check out any books about dangerous carnivores.

Author-illustrator Mark Mitchell hosts this blog and offers an ongoing online course in drawing and painting for  children’s book illustration, “Make Your Splashes; Make Your Marks!”