Laura Jennings grew up surrounded by animals in the Texas Hill Country town of Kempner.

“I trained my first dog, a Rottweiler for obedience when I was 12,” she says.

Maybe that’s why the dynamic animals she’s created for the role playing game Shard  look like people you might  know — almost  old friends you wouldn’t mind going with you on a harrowing adventure.

Oh, humans played their parts in her youth, too, and books — fantasy novels mainly — and video games.  “I used to sit and watch my brother play Zelda and Mario for hours,” she says.

After studying fine arts at Central Texas Community College and Texas Tech University, Laurie enrolled in the design art  programming and animation sequence at Austin Community College, She has set her sites on the fields of video game art and character creation.

“The Lion King changed my life.  I loved the action, the movement.   I don’t have the patience for animation, but that’s what I’m into,” she says.

“At school we’re doing the old  pegboard animation, like the crews did for Bambi , they still ask for the same kind of detail in the industry.

“Everybody going into this wants to design, do storyboards and be a lead character artist. It’s the very first graphic the public sees.

“I do go for games, and it is pretty astonishing — the emerging media and the economic growth that’s been predicted for games and computer art in the next 50 years.

“Austin has something like 50 studios; they’re mostly small. In this room there’s an animator and you can walk right next door and take it to the programmer.”

“Video game art is  a combination of animated movie and comic book and it’s  interactive. Some of the most gorgeous art I’ve seen has been in the animation of Nintendo and Capcom games, such as Squaresoft Final Fantasy series and Legend of Zelda.

Laura also feels pulled by graphic novels and children’s books and attends meetings of the Austin chapter of the Society of Children’s Book Writers and Illustrators (Austin SCBWI).

“People think children’s book illustration is easy. It’s actually cutting edge. There are similarities to game art, such as the storyboarding and the composition and how you have to know your story visually so very well. The work of James Gurney holds its metal against any fine art happening today and he (and others like him) have chosen literature, which I thank them for.”

Laura “liked the idea of puffy pants” for her fantasy
character for the game Shard, designed by art director Scott Jones.

“I was trying to turn a lot of the animal motifs on their heads.  So I wanted to make this Aesop’s-like skunk a bit coquetish, like she’s waiting for Pepe Le Pew.”

Shard is a table-top  role playing game “of heroic fantasy, set in the Realm of Dardunah, World of the False Dawn,”
the website says.   “Players may choose from a wide variety of animal  people who are the main cast of the many adventures the world offers.”

Dardunah is a medieval Shangrila, far east of Middle Earth. (I spent some time poking around the site. I must say I’m ready for the movie to come out.)

Laura recalls, “I don’t know what it was that got their attention, but they saw some of my art and told me, ‘We see that you’ve done a bunch of animal creatures.'”

“Actually there were  three of us working on the game’s characters. We had to make it look like all of the illustration was done by one person. We each worked in our own category — I didn’t want  the insects, snakes and reptiles so I raised my hand and said, ‘I’ll take the mammals!’ ”

She had to research animals in their natural settings, and come up with props, costumery and accessories that  “fit” into this world with its Persian and Asian flavors, she says.

“I had to find out what old armour looks like, leggings and foorwear, what kind of robes students of a temple would have worn.”

For the fellow in the game at the right, a seashore dweller, she found photo reference of an otter, stopping by a river, panting.

Pencil drawings were scanned and values were added in Photoshop using the smudge tool and the dodge and burn tool.

“I had a lot of fun with the textures in Photoshop, learning to push things around.

“I was asked to  re-do a squirrel monster because the armor looked too much like beat-up metal. Metal is a material of our world  — whereas in Dardunah, the armor is made of crystal.

“There’s a lot of movement and dynamic in my own work,” Laura says.

“I’ve been very gestural for a long time. I’m only just now starting to work on the edges, the contour.

“My sketches are half reference — half imagination. Many of them are just from little thumbnail sketches. As I look at these  I’m seeking that pose that speaks about inner character. I’m asking, ‘What has punch. What is moving, or defining,” Laura says.

“In video games, the silhouette is so important. Their silhouettes define who they are in the game.”

Laura Jennings’ fun blog  is now on our blogroll.  You’ll find her art there, too and on her Deviant Art gallery page, where she’s posted some graphic novel panels, backgrounds and more of her exquisite characters.  Deviant Art features concept art by teen and young adult artists from around the world.

* * * * *
Mark Mitchell hosts How To Be A Children’s Book Illustrator.
Check out the free lessons of his short course, Power Color: The Keys to Color Mastery  here. 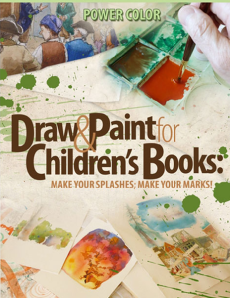